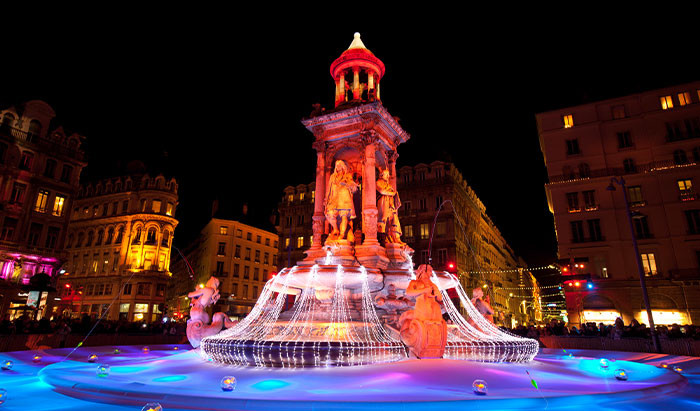 Did You Know? The Real Capital of Light is Lyon!


For over 30 years, every year at the beginning of December, the city of Lyon lights up in an explosion of lights and colours. The streets, the squares, and the facades of emblematic monuments welcome artistic installations created by designers, artists, and video makers.

This tradition originated in 1643, when the citizens of Lyon made a vow to the Virgin Mary to protect the city from the plague, promising that if they had survived every year they would have climbed the Fourvière hill to pay homage. Every year the Lyonnais went to the hill and decided to build a church dedicated to the Virgin.

Two hundred years later, on December 8, 1852, a strong storm interrupted the inauguration of the bell tower on which a statue dedicated to the Virgin was resting. Suddenly the storm stopped, the sky cleared and the Lyonnais illuminated the facades of their homes with lanterns and they went out into the streets to celebrate the Virgin Mary until late at night. Since that day, the Festival of Lights - ‘Fête des Lumières’ - is celebrated every year.
DISCOVER ALL STORIES
COMPANY PRESENTATION